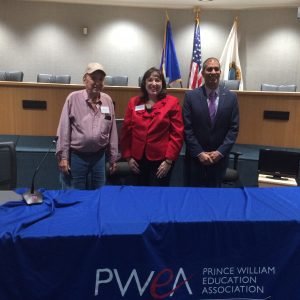 The forums highlighted their priorities, including teacher salaries, reducing class sizes and security, and the means to go about funding those goals.

Dr. Babur Lateef, interim Chair of the Prince William School Board, and Alyson Satterwhite, Gainesville District representative to the school board, participated in a community forum hosted by the Committee of 100 and League of Women voters at Northern Virginia Community College’s Manassas campus, last week.

Then on Monday, Oct. 1, Lateef, Satterwhite and a third candidate, Stanley Bender, participated in a second community forum hosted by Prince William Education Association at the McCoart Administrative Building.

In each forum, candidates attempted to distinguish themselves and lay out their vision for the school division by answering questions generated by the community.

Dr. Lateef is local Opthalmologist and father of four who is a member of the Virginia of University Visitors board and a PTO member of at Thomas Jefferson High School for Science and Technology.

Stanley Bender, a retired naval officer and engineer, who worked internationally, gave an outside perspective, comparing the school division to a corporation.

Babur Lateef wants to make reducing class sizes a priority. He said the school board must go to the board of county supervisors and “strongly advocate” for more funding for more students and per pupil spending. If they could hire more teachers to reduce class sizes, it would also boost student achievement and help to retain quality educators. They also need to ask for more infrastructure improvements to make room for new classes.

Alyson Satterwhite named among her accomplishments strongly pushing for the Superintendent’s Class Size Reduction Plan, by which the schools provide $1 million each year towards class size reduction, which is then matched by the county board. She called it a “huge tremendous academic benefit.” In the future, they should plan ahead to do even more.

Stanley Bender said the school board needs to know what they are going to do and then do it.

Prince William County Schools are last in class sizes and teacher pay in the Northern Virginia area. “We are at rock bottom. What can we do to make teachers’ happy?” He believes increasing teacher pay a priority to keep Prince William competitive. The community would benefits because Prince William would be a more desirable community.

He wants the board to "strongly advocate" to the county supervisors, believing the revenue-sharing agreement with the county board should be a floor, not a ceiling.

He noted his strong connections to the governor’s office and with Education Secretary, Atif Qarni of Prince William to help secure more state funding and grants.

Satterwhite has voted for pay increases for teachers every year (though not both class size and cost of living together.) To provide more, she said the school board must include increasing teacher pay within the school division’s five-year plan.

She said the school board must work with supervisors on the county board who have novel ideas to raise additional funding for schools. Because she is a fiscal conservative, she prefers out of the box ways to increase school funding. She further recommends her board ask the General Assembly to once again provide more money to Northern Virginia Districts where everything is more expensive.

Bender said it all comes down to money again. How will they ask for the money? They should call it a requirement. They should provide the details to the board.

Lateef gave a definitive “NO” to arming teachers. He said they need to start with the basics, doors that lock appropriately and move forward from there. At the Committee of 100 meeting, he said lockdown drills are important and contingency plans for various circumstances.

Satterwhite names as her greatest accomplishment the hiring of new support staff, such as 13 social workers, including a specialist in human trafficking and increasing pay for nurses. She said that in addition to getting closer to recommended student ratios, working with students’ on their mental health makes schools safer. She does not want to arm teachers.

She said the school division is already looking at school infrastructure and making necessary improvement. She said they have SRO officers and school and police officers but through lobbying in Richmond, they could have more retired officers through changes to the Virginia Retirement Plan.

Lateef said that Prince William needs to have proper procedures on how employees are treated. They need to hire more people in the employment sector of the division to handle such issues. He proposed last year that processes for teachers’ lobbying complaints be reviewed so they could then be improved upon if needed.

Satterwhite said she was very much upset by the tone of a letter sent out to parents and teachers in her community (regarding Ronald Reagan Middle School.) She asked for Superintendent, Dr. Steven Walts to go on a listening tour, which Dr. Lateef voted against, and the motion failed. She also supported the hiring of an ombudsman to make sure employee issues are handled fairly.

Bender said there may be cases where “gender-wise” employees would feel “uneasy.” He said “we are very seldom going to fire you, if you are a quality person.”

Lateef said there is a need to hire more counselors to close the student-to-counselor ratio more to recommended levels.

Satterwhite said there are various means to change the school culture, such as “Rachel’s Challenge” which gets the entire school involved.

Lateef believes that protecting LGBTQ students and employees is of the utmost importance. As a doctor he allowed a homosexual partner to stay in the recovery room. “We don’t discriminate. That’s a no-brainer. I will support that every minute of the day.”

Satterwhite did not vote to add LGBTQ people to the nondiscrimination policy but said she believes the school division does not discriminate. “Our staff in PWCS we work tirelessly for each student. We are not a School division that discriminates amongst kids.”

Bender did not attend that debate.

Satterwhite said, “no, because we need that money for public education.” However, she is in favor of tax rebates for those who send their children to private school. She believes parents need to have a say in their children’s education.

Bender said he was not sure how it worked now if private schools received public funding, but he said public education should be a priority.

Hiring of a New Superintendent

Should they be tasked with hiring a new superintendent, Lateef said he has some experience in that area. He worked on the Presidential Search Committee at Virginia University. He wants someone who could help close the achievement gap, understands the community and the community’s challenges and can manage people well.

Satterwhite said it’s a diverse school division and one that is rapidly growing. The person would also need to handle such a large budget. Perhaps most importantly, they need to reflect the needs and desire of the parents.

Bender said he is not that familiar with the school system and, “not at all qualified to say who should or shouldn’t be hired.” He said people should be promoted on their initiative. He was not sure who hired the superintendent (who is hired by the school board.)

When asked for a one-word answer in the Committee of 100 Debate, Lateef said “YES” he would like high school to start school later.

Satterwhite answered maybe because they have to consider teens watching their younger siblings after school.

Bender did not attend the Committee of 100 debate where this question was asked.

On Improving Standards for the U.S.A. without Spending Additional Money

Lateef said that the U.S. has never been first in math or reading or memorization, but they have been first in innovation, creativity, communication and problem-solving. This is what the schools need to emphasize.

Satterwhite said, “stop teaching to the test” and provide more hands-on, sensory work. She also dislikes that the state pays large companies for their tests. She wants the division to have teachers share their knowledge rather than bringing in expensive consultants.

Bender said it’s a “stupid question” because public education benefits everyone. He said if teachers have initiative if won’t cost more money.

One thing to Cut, One Need to Meet

Prince William County Schools has created a list of “Critical Unmet Needs.” Satterwhite said that she would like to hire more special education teachers. She would like to cut some positions that do not work directly with children. She has opposed adding many of those positions when they show up in the superintendent’s budget.

Lateef said that he would like to see schools 100% covered with nurses and the hiring of more counselors. He believes that generally capital improvement gets pushed off, but that is something that is difficult because those are needed as well.

Would They be in Favor in Adding a Teacher as a Non-Voting member of the Board?

“YES,” said Lateef emphatically. He said they do that at the University of Virginia. “I have no problem having more folks at the table.”

Satterwhite said “yes, I would” provided it was done legally. She noted they already have a student board member and she is “intrigued” by what a teacher could bring to the table

Bender opposed the idea. “It’s just a drag. Does this guy get paid? I’ve never been on a board that needed an extra person.”

Lateef said Satterwhite had been very helpful and friendly when he joined the board. She thanked him for voluntarily stepping up during a difficult time for the board. They both thanked Bender for putting himself out there and running for the position.

Lateef said is already working with the Secretary of Education to bring IBM to a Title I high school located near a community college. He notes that Virginia’s First Lady, Pam Northam, is offering $6 million for preK programs, but they need to provide the space for it or lose the grant. That's something he hopes to work on.

Satterwhite emphasized her achievements on the board, specifically the Class Size Reduction Plan and increased graduation rates as a result of the Summer Graduation Academy.

Satterwhite said she loves what she does, is passionate about students and hopes to continue to be a parent advocate as she was before she was on the board.

Bender said he’s heard that teaching is an undesirable position but he’s never met a teacher he didn’t like, and never had a job he didn’t like. He said the way forward is to go to the board of supervisors with a statistical analysis and make the case for funding requirements.

The election is Nov. 6. School board representatives in Virginia run as independents.