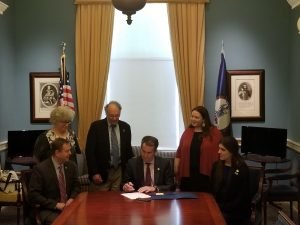 The bill, patroned by Del. Patrick Hope (D-47th ) of Arlington, and co-patroned by Danica Roem (D-13th) of Manassas, essentially says that school meal debt must be handled confidentially thought the parents, not the students.

Although many Virginia families qualify for free or reduced lunches, many do not, and sometimes students who do not qualify may fall behind on their lunch debt. In these circumstance, the students may not be able to eat lunch, or they may be given a different replacement meal or snack. Students are also singled out in other ways, which could make them feel embarrassed in front of their peers.

Del. Hope acknowledged that schools are not looking to shame students, but just want to get the message home to mom and dad that their children have fallen behind on their lunch payments. However, with technology, Hope said schools can now contact parents directly and no longer have to employ means that might inadvertently shame a student.

“Bright colored band, bright stickers, cold plate, forced to do lunch duty, even tossing out lunch: it’s a stigma that everyone sees you. There’s a better way to communicate that to students’ parents,” Hope said.

Hope said the issue was brought to his attention by SALT, a Northern Virginia activist group. Looking into it further, Hope found it is a national issue and one that affects many Virginia students.

Hope believed forcing schools to change counterproductive practices is a beneficial first step in addressing other issues surrounding school meals. “This is a longer term problem; this is more of a short term solution,” he said.

This bill was easy to pass, he said, because there is no cost involved with the changes.

Hope asked that Del. Danica Roem serve as Chief Co-patron of the bill. Roem offered her own school lunch bill, HB1477, which was more expansive and crafted at the request of Gainesville constituent Adelle Settle, best known for her “Settle the Debt” fundraiser. Roem's bill also prohibited shaming practices and having a student work off a lunch debt. However, it also said a school could not deny anyone student lunch.

Although HB1477 did not win enough approval, Settle is excited about the passage of HB50, and drove down to Richmond to witness the signing. “It’s a really great victory; a definite win for Virginia students,” she said.

Settle plans to fight for further initiatives to help make sure all students eat even if that means funding all school meals within school budgets. 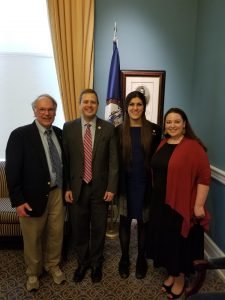 According to Settle, Gov. Northam was very receptive the idea of finding a way to feed every student, which she found unsurprising since he is a pediatrician. “Kids, ultimately, are very vulnerable,” Settle said.

Del. Hope shares Settle’s goal that Virginia feed all of its minor students, but first wants to look into what it would cost Virginia and jurisdictions across the state, including in Northern Virginia.

“Should every student just have free or reduced lunch or some kind of subsidy? That’s a much bigger problem,” he said. “It would cost Virginia money; still, I support that concept.”

Del. Roem was excited by the passage of the HB50, which included some of the provisions she was pushing for.

“Thank you to Delegate Hope for carrying this legislation and inviting me to sign on to House Bill 50 and thank you to Governor Northam for signing this legislation. Thank you as well to SALT for their important advocacy on this issue. A special thanks goes to my constituent Adelle Settle for all of her important work to raise awareness for anti-school meal shaming as well as her efforts to pay off student lunch debt in Prince William County.”

“Any action we can take in the General Assembly to prevent school officials from singling out or stigmatizing children because of their parents’ financial situation is an expression of compassionate leadership. At the same time, we acknowledge we still have more work to do to ensure equitable treatment for all public school students across the Commonwealth.”