Board Approve Considering Changing to Land Use Along Pageland Lane 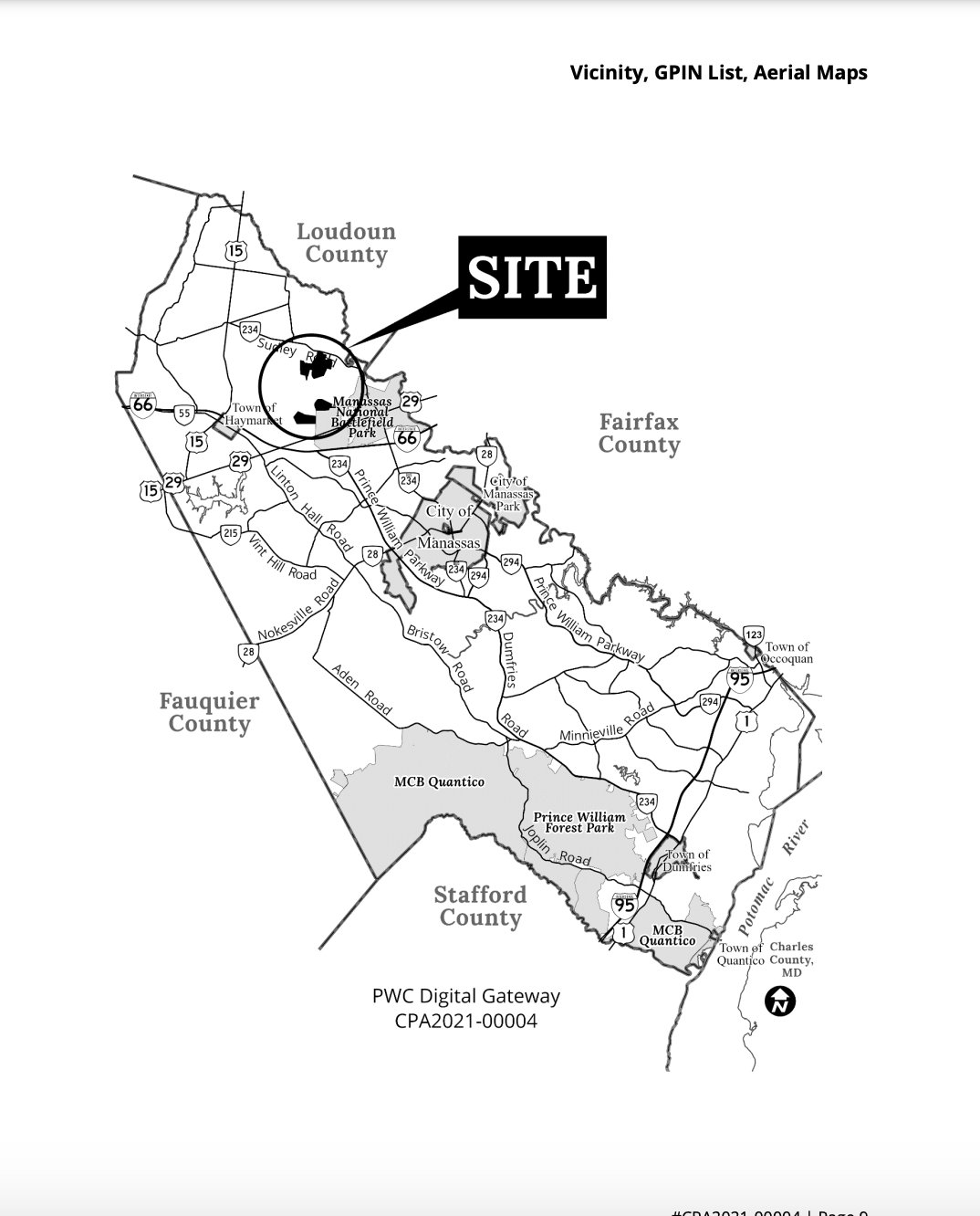 Prince William County Board of Supervisors moved in the direction of bringing data centers to Pageland Lane near the Manasssas Battlefield, Wednesday morning, after 1 a.m.

Via a 5-3 vote, the board began the process of the amending the County’s Comprehensive Plan to consider rezoning approximately 800 acres in the Gainesville District from Agricultural/Estate and Environmental Resource to Technology Flex.

According to the agenda item, if rezoned, “Prince William County Digital Gateway" could be  built abutting the Manassas/Bull Run National Battlefield and Conway Robinson State Park as well as near Sudley Road/Route 234 in rural Gainesville.

The four parcels are located on both the east and west side of Pageland Lane, south of State Route 234 and north of State Route 29. The proposal is highly controversial as these areas fall within the protected “Rural Crescent” and outside of the data center overlay district.

The "applicant " is a cohort of 16 property owners, combining 27 parcels of their land. They hope to sell their properties without the constraint of the one home per 10 acre lot designation that currently exists. The rezoning would make their properties more profitable.

However, not all supervisors were on board.

The Republicans still seek to protect the rural areas of the county, while some Democrats find the land designation antiquated.

“Allowing data centers on this land would pose a significant threat to two nearby national parks, Manassas National Battlefield Park and Prince William Forest Park, as well as the integrity of the rural crescent... Prince William County’s rural landscape is filled with history and character and supports the local tourism industry. To clutter the parks’ boundary with gigantic, notably noisy facilities would be a mistake," read the statement.

Many residents also opposed the transformation of the Rural Crescent into something industrial. They fear more high-power transmission lines obstructing views and decreasing home values. They asked that data centers stay within the "data center overlay district," which was created for that very purpose.

And those in favor of conservation, said the county needs to embrace the rural character of the area and bring in more agratourism industries.

But landowners along Pageland Lane said they have been waiting to sell their properties for decades. The county constricted their property rights in 1988. Now, they say it is no longer profitable to run farms in Prince William County. They further arguedthe commuter traffic is a hinderance to even living in the area.

Following the media conference, Western Prince William resident Maryln Karp said the effect of this vote would be felt throughout the rural crescent and anyone who doesn’t sell “is toast.” She said it is all being done benefit, “30 people who are already rich....This is just about money. This Board of County Supervisors is all about money.” She said she could no longer support those she helped to get elected.

The Rural Crescent policy, which was passed in 1988, was intended to slow growth in the county for approximately 20 years. The supervisors now grapple with whether they should continue to protect it, and if so, to what extent?

Supervisor Angry said some will call him the “bad guy,” for advocating for the data centers, but he is the "good guy" to farming families for giving them back their property rights and "generational wealth."

“It’s their children’s future they are looking out for," Angry said.

He also said taxing data centers would help take the burden off the residential tax payer. Supervisor Bailey called the project a “win-win."

Supervisor Boddye said  they can do this and be “creative” in protecting the view shed near the Battlefield while still helping the applicants.

But Supervisor Lawson called the plan “absurd.” She pointed out that her colleagues set strategic goals such as protecting historic places, conservation and utilizing parks to  increase tourism; however, they then support a plan that works against such goals. She said the plan only benefits the landowners.

She also noted that she has remained consistent in protecting the Rural Crescent even as some have reversed their positions.

Supervisor Candland requested that the vote be deferred until such time when they have more of a study of the area completed. The board approved the hiring of a consultant in May for $120,000.

Candland said he lives in Gainesvilles rural area and rejects the idea that it is no longer a desirable place to live. Most other residents believe that too, he said, which is the reason he continues to fight against development.

The vote just begins the process;the land designation has not yet been changed. The Planning Department will first study it, then make recomendations. Then that proposal will then go before the Planning Commission. It would need the approval of the majority of the board of supervisors to be enacted.

A change in land designation could also ripple throughout the area, weakening the Rural Crescent.