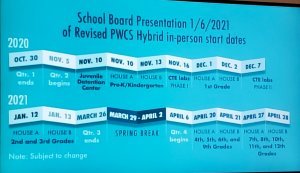 PWCS presents Dr. Steven Walts' plan for return to in person learning for 2021.

Prince William County Schools' Superintendent proposed a new Phase in Return to Building Plan that would have most students not return to school until after spring break.

The school board will further discuss the plan at a special meeting to be held Jan. 12 at 5:30 p.m. At that time the board will either approve the plan or vote to amendments it. Either way, school openings for children above third grade will be significantly delayed. An abbreviated Citizen’s Time will be held from 5:30-6:30 p.m. Citizens are also encouraged to email their school board members.

Walts explained that first and foremost he does not want to return students beyond third grade. Prince William County’s COVID-19 positivity rate metrics reached 20% last week, making it the highest in the state. CDC guidance says that in schools like PWCS with “Moderate-High” COVID-19 status (when factoring in mitigations), ought to provide in person learning to only the most vulnerable learners and PreK-3rd grade student. While primary grade students remain on schedule to return, Walt proposed a long wait for older students.

Earlier in the evening, the school board passed a resolution to request that the governor prioritize educators receive the vaccine after first responders. If that occurs within the next few months, it is likely that even high-risk Tier 1 teachers, who could be prioritized, will feel comfortable returning.

Although the school board previously granted the superintendent the ability to set the timeline for return to in-person learning, some members described his recent changes as “radical.” The majority said they would prefer to hold a formal vote so that they have the ability to make some changes to the plan.

Chairman Babur Lateef said that accepting April dates would “box them in.” He said it is possible that metrics could improve before then, and many may even be vaccinated by March.

Walts said the dates were chosen because it is likely many will be a vaccine by then. Also, he said it would be nearly impossible to make drastic schedule changes in the middle of the marking period, so he recommended waiting until the beginning of the fourth marking period. However, he would rather not have students return immediately after spring break as there would likely be surge due to travel.

Walts said there is flexibility in terms of bringing back 4th and 5th grade students. Elementary students stay in more manageable “cohorts,” interacting with much fewer people throughout the day.

However, middle and high school students are much more difficult to manage during the pandemic. Schedules would need to be changed, he said. Tier 1 teachers do not feel comfortable returning and the division is short on substitutes. Busing would be very difficult with long travel times.

Walts also insinuated he did not arrive at a decision on his own. He spoken with Dr. James Lane, the Virginia Superintendent of Schools, and conferenced with other superintendents. He noted that the average school division is 3-4,000 students. Prince William County School has 93,000 plus students. One high school could have 500 students in classes even as it is serving just a 1/3 of the population via the hybrid model.

Gainesville representative Jennifer Wall was most opposed to the plan. She said she has high school students and said if they plan to bring them back near May, teens and parents will say, “what’s the point?”

She said that is going into testing season and students will feel as though the school year is over. She said to expect that 50% of families will be unhappy with the plan. Obviously, she said you need to care about the teachers because the teachers care for the students, but you cannot overlook the fact that their business is educating students.

She added that CDC guidelines are not set in stone and she was under the impression that their mitigations were sufficient to override some of the high metrics.

Woodbridge representative Loree Williams looked favorably on the plan. She said she feels students are safest at home, but also knows that many families want the choice to return. However, she said to caution people about saying things like the kids will be out of school for a year. She said it is an insult to teacher, and to students who are also working hard.

Williams also liked that as the governor will be granting the division millions more in funding via the CARES ACT, it can fill in those gaps for at-risk learners. Walts said teachers can receive stipends to tutor students virtually after school hours or on Mondays. Some teachers could also opt to teach in schools to small groups for students who require that options for their success.

Board members decided to continue their discussion at a special meeting since it was already 2 a.m. when the superintendent presented his plan.

The meeting began with the board listening to nearly three hours of Citizen’s Time. Nearly 70 Tier 1 ADA health-risk teachers spoke about their experiences. In many cases, friends or colleagues spoke on behalf of employees who feared retaliation.

Employees shared their health conditions and their fears regarding catching COVID-19. Some had conditions even as severe as cancer. Some worried about their pregnancies or newborn babies at home. Many said they could not possibly choose to put themselves or families at risk of getting COVID-19.

Donna Eagle from Human Resources explained that they had to make other reasonable accommodations to Tier 1 teachers, but need not offer them telework. She said the division would prefer to allow everyone to work remotely, but with 692 Tier 1 teachers requesting that accommodations, the schools would not be able to operate. Accommodations might be N95 masks, bigger classrooms, private entrances and Plexi-glass.

Mary McGowin, division counsel, would not allow the division to say how many teachers had resigned, nor give details on how many substitutes were needed but unavailable. However, Walts alluded to the fact that staffing during the pandemic had become a significant challenge.

He also explained that as much as people would like to deny it, spread of the virus does occur in schools. They must be reasonable in assessing their mitigations, and mitigations on the middle school and high school levels would be very challenging.

"I do not come to this decision lightly. My own child is a senior this year," he said. He reminded people they are talking about managing COVID-19. It is not the flu or a cold.