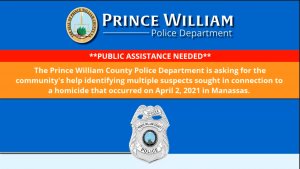 Prince William County Homicide detectives are asking for the community’s help identifying the suspects involved in the shooting that occurred outside the Manassas Mall on April 2.

"During the incident, a 34-year-old man from Baltimore, Maryland was killed and another 22-year-old man was injured," said Prince William Police spokesperson Officer Renee Carr.

Video surveillance of the incident is being made publicly available in this effort to identify those responsible.

The Manassas Mall is located on Sudley Road in the Manassas area of Prince William County.

Homicide Investigation -- On April 2 at 11:16 p.m., officers responded to the parking lot of the Manassas Mall located at 8300 Sudley Road in Manassas (20109) to investigate a shooting.

The investigation revealed that an altercation occurred in the parking lot. During the encounter, shots were fired and the two men where struck. Parties dispersed prior to police arriving at the location.

Detectives with the Homicide Unit are actively investigating the incident to determine what led up to the shooting and are seeking to speak with anyone who was present during the altercation who can provide more details as to what occurred.

No arrest has been made in this incident. More information will be released when available. The investigation continues.

Anyone with information regarding this homicide is asked to contact the Prince William County Police Department tipline at 703.792.7000 or submit a webtip to: www.pwcgov.org/policetip.