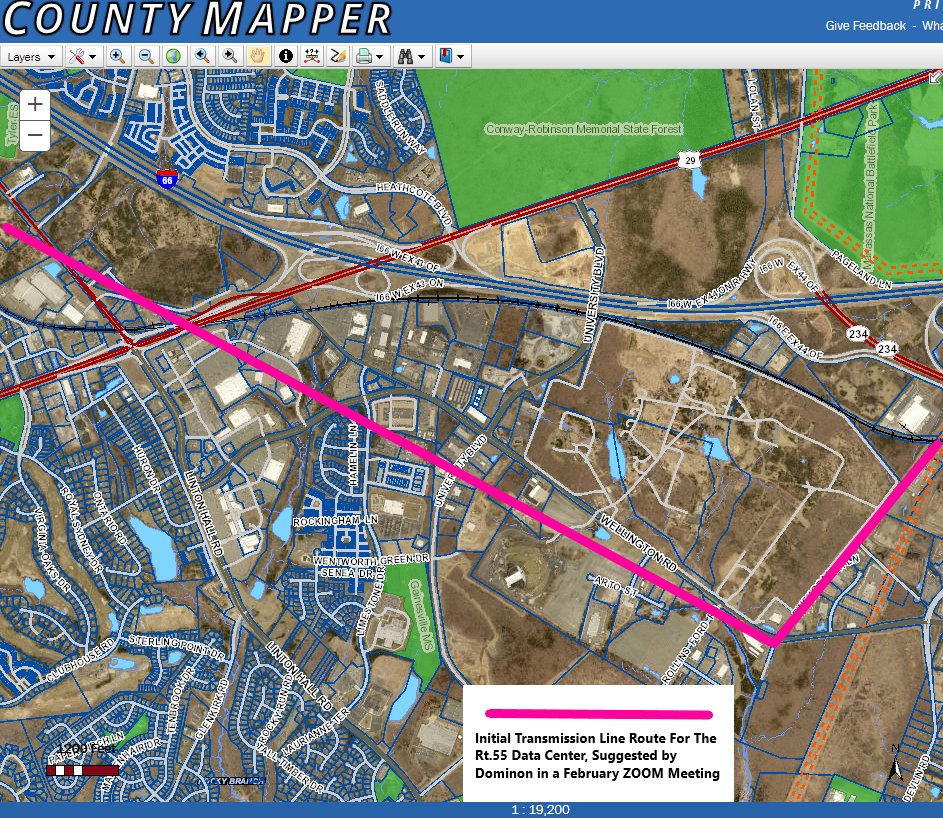 "It is now clear.  The only lesson learned from the chaos of the Haymarket Transmission line is that Prince William County government is prone to repeat the same mistakes.  We have another data center project proposed for the Gainesville district on the outskirts of the town of Haymarket."”
Coalition to Protect Prince William County
Data Center to be located across from Catharpin Road

The Village Park Technology Park Data Center in Gainesville is proposed for the property along the western side of Route 55/John Marshal Highway across from Catharpin Road. It is adjacent to Village Place and east of the Town of Haymarket. It is located in the Gainesville District.

The Prince William Board of County Supervisors will vote on its rezoning and Special Use Permit during the evening session of its June 15 meeting. Public comment time is scheduled for 7:30 p.m.

The proposed location for the Data Center at Village Technology Park is across the street from the intersection of Route 55 and Catharpin Road in Gainesville.

OPINION PIECE: This article represents the opinion of the Coalition to Protect Prince William County, a nonpartisan citizens' environmental group.

It is now clear.  The only lesson learned from the chaos of the Haymarket Transmission line is that Prince William County government is prone to repeat the same mistakes.  We have another data center project proposed for the Gainesville district on the outskirts of the town of Haymarket. But this time, the Board knows in advance that a new transmission line will be required to run through Gainesville to provide power.

The proposal for the Village Place Technology Park of Gainesville, outside the county's data center overlay district, for a 1.2M sq. ft. data center campus 1/2 mile from the southeast end of Haymarket along Rte. 55, adjacent to 222 homes in Village Place and across the street from Pace Elementary school, changes the previously approved plan to four 70′ tall data center buildings.  The Board of Supervisors votes on this proposal on Tuesday, June 15 in the 7:30 pm session.

Dominion Energy confirmed during a 2/10/21 meeting with county staff, the Coalition, and the applicant, that this project, combined with the power needed for the already approved 4.5M sq. ft. Gainesville Crossing data center campus on Rte. 29 adjacent to Rte. 66, will require a new transmission line, and one or possibly two new substations.  We also know that at least two other additionalData Center SUP's are under review for the corner of 55/Catharpin.

This map, delineating the initial route suggested by Dominion Energy during the February meeting, leaves no ambiguity that a new transmission line will be required for the Village Place data center project.

Because there has been no formal load request from the Village Place data center applicants, this new infrastructure is only the estimated minimum possibly required.

While the previous Board could claim ignorance of the Haymarket Amazon data center electrical infrastructure needs, the current Board should be fully aware that approval of this project will require new transmission and substation facilities in the Gainesville area.

On page 7 of the application, "...the Applicant proffers to abandon the project if electrical service to the data center triggers the need for construction of new transmission towers carrying overhead bulk electric transmission lines from west of the property in the direction of the Town of Haymarket and residential areas." The reality is that no developer can commit to where a transmission line will be routed.  That is the sole responsibility of the SCC.

Regardless, we note that the communities threatened by the initial western routes proposed in the Amazon case were equally opposed to the subsequent proposals that threatened their neighbors to the East, North, and South of the proposed Amazon data center campus. We vividly recall the battle cry “Not on my property, not on my neighbor’s property.”

The Staff Report goes on to say: "... The site is designated CEC, Community Employment Center. It is also within the I-66/Route 29 Sector Plan and was approved as a town center. The purpose of the Community Employment Center is to provide for areas of low- to mid-rise offices, research and development, lodging, and mixed-use projects planned and developed in a comprehensive, coordinated manner. When implemented in accordance with its intent to conveniently link businesses and residences, by coordinating employment centers with residential areas, the PMD district is an implementation tool for the CEC designation. However, by the nature of the use, the proposed secure data center campus is limited in its ability to integrate with the adjacent residential community."

With its limited employment the data center campus is the antithesis of that strategy. With this proposal the county is willing to sacrifice the jobs and compatible uses created by a town center - for data centers that have few sustainable long term jobs (article).

Your input to the Board on this vote is critical!  Show up and speak at the public hearing during the 7:30 pm session on Tuesday at the McCoart building.  Or sign up to speak remotely.  At the very least, send the Board your own email, outlining how you want them to vote on this proposal.

The community took a reasoned approach in the Haymarket Amazon transmission line case, one that would have resulted in the most equitable solution, to use the “line extension policy” in a unique way.  Maybe it’s because the folks in the Rural Crescent are accustomed to providing their own infrastructure, but that solution was borne out of thinking outside the box.  We almost succeeded.  You know the old adage, if at first you don’t succeed – try, try again.

The State Corporate Commission legal staff agreed with this position in their post hearing brief on the Haymarket case, in which they stated most eloquently:
.…the Commission “may wish to require [Amazon] to put some of its own skin into the game. Otherwise, the general public [all of us], already burdened by the environmental and aesthetic impacts of otherwise unneeded transmission projects, [are] also burdened with 100% of the otherwise unnecessary costs.”

The question we should all be asking is: what are we being forced to sacrifice until innovation comes to shrink data servers and to no longer require massive box buildings to house them?

No one can claim the Board’s eyes are not wide open to the colossal energy needs of data centers.  This, combined with the impact of their physical footprint on storm water runoff, their massive water usage, and their contribution to climate change - all cannot be denied.

“UNLESS someone like you cares a whole awful lot, Nothing is going to get better.  It’s not.”