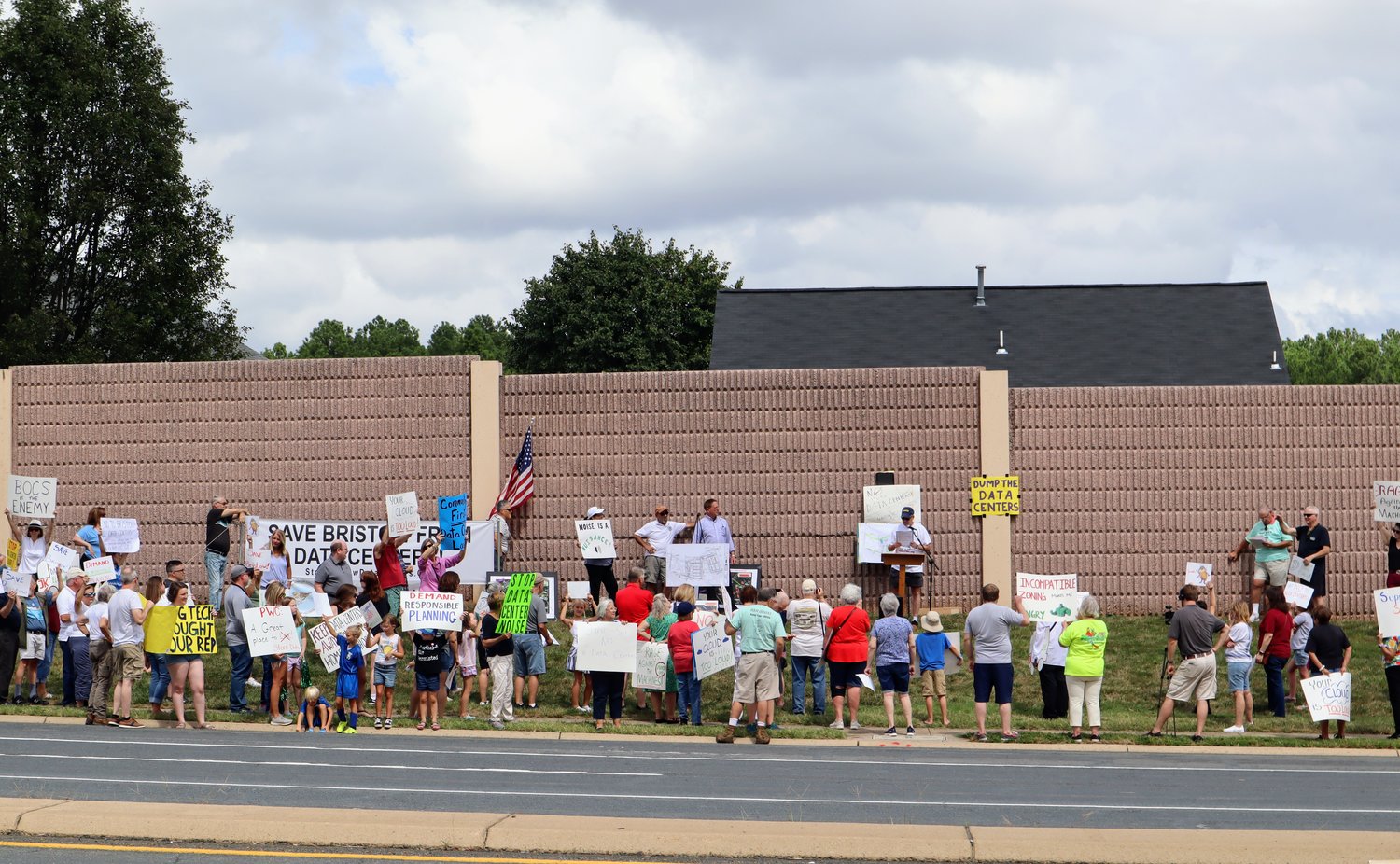 A group of 128 Prince William residents participated in a rally and media conference to "Save Bristow” against rampant data center development. They met Saturday afternoon, on Linton Hall Road near Amberleigh Station.

The rally came just days before Devlin Road Tech Park public hearing scheduled for Sept. 13, allowing organizers to urged residents to speak out against the project.

Residents held signs that read, “Rage against the machines,” “I like big buffers and I cannot lie,” and “size does matter.” Many parents brought their children. Motorists beeped as they drove past.

Speakers were united in their belief that data centers should not make incursions into residential areas, noting that high-density data centers would be too loud and disruptive, thus destroying their peaceful way of life.

They accused their Prince William Supervisors of not being transparent about the plans for the multiple centers even as data center noise could cause mental health maladies and other illnesses.

Pleickhardt explained that one year ago the Prince William Board of County Supervisors approved a data 'center' bordering his neighborhood. Pleickhardt maintains he was led to believe it would have minimal impact.

Recently he discovered the site would house 11 data centers. Now, he and his neighbors are demanding supervisors remand the project.

Pleickhardt said they were not told how data center buildings were planned for the property, nor how loud the data centers would be.

“Billionaires like Chuck Kuhn of JK Movers, who owns the property around Amberleigh Station and Silver Leaf want to surround our homes with eleven 300,000 square feet, 80-foot tall buildings, 100 feet from our homes,” said Pleickhardt. “I had to do a FOIA request to see that site plan with the 11 data centers around us. While applicants are hiding behind nondisclosure agreements. The residents will speak truth to power!"

Pleickhardt blamed county representatives. “Our county supervisors are beholden to big business, big tech, and are sacrificing our neighborhoods, our schools, and most of all, our children.”

“We have had enough. Our home values are now beginning to erode due to the presence of data centers, yet our taxes are increasing. What’s wrong with that scenario? Where’s our liberty and enjoyment of our homes? This is our home, not yours,” he said.

“My family and I love Bristow, Virginia," he told the crowd. "I know you do as well. and I am willing to do battle with a corrupt county government that is embarrassing.” 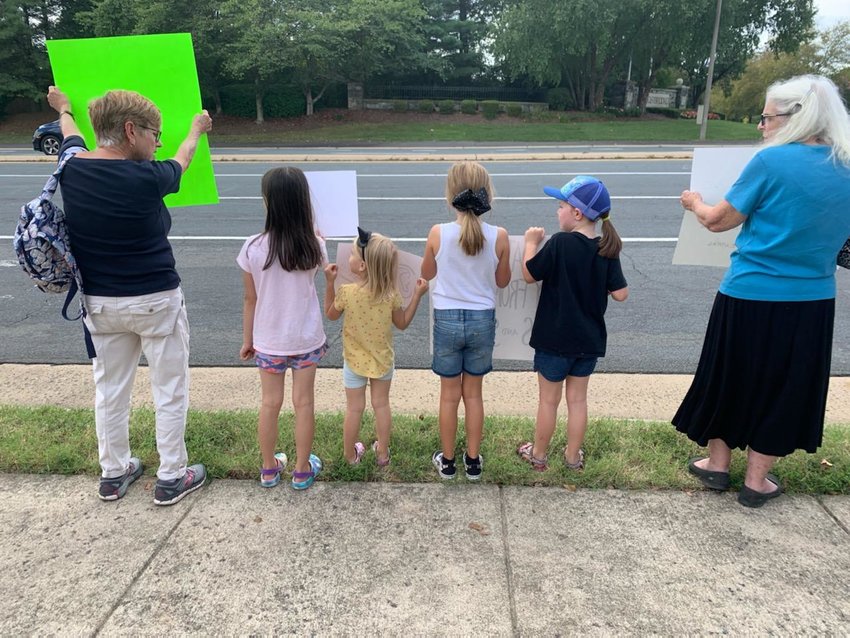 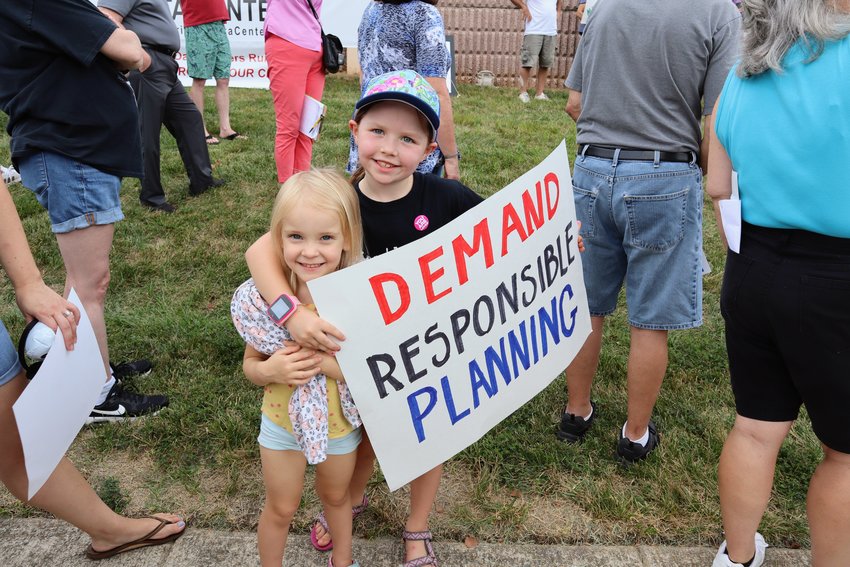 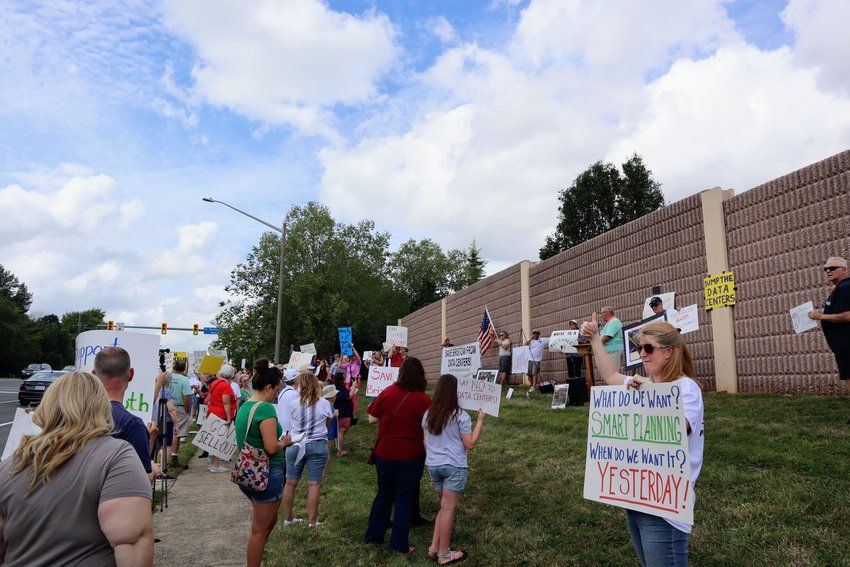 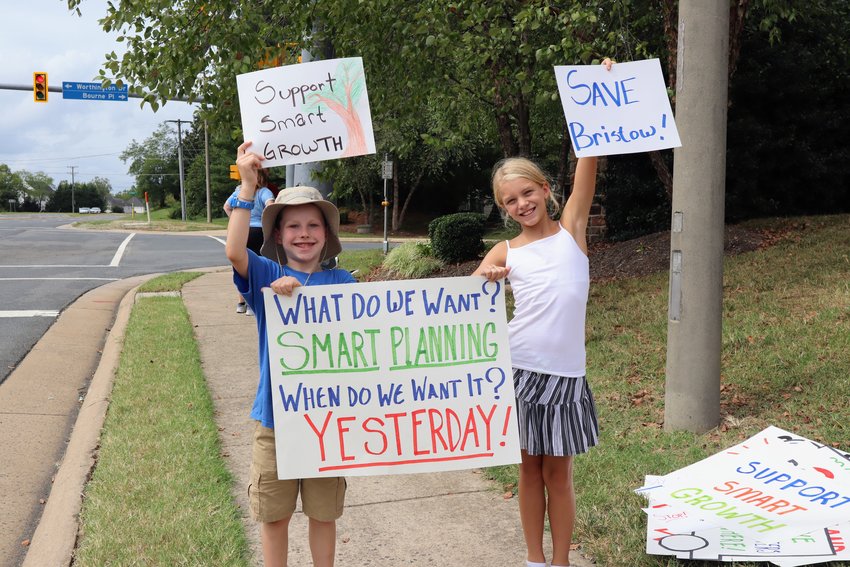 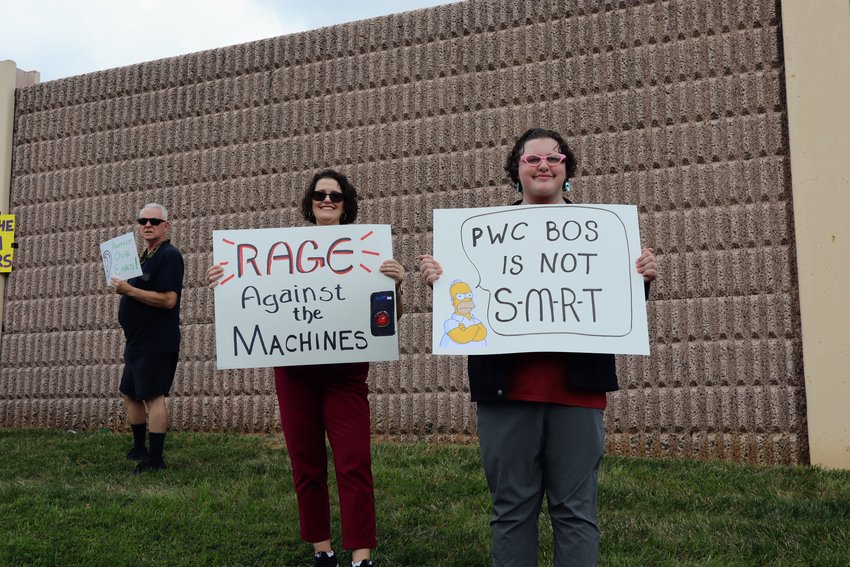 Allen urged attendees to speak at the 7:30 p.m. public hearing, Tuesday, and tell the board to delay the Devlin vote until such time that there were proper mitigations in place to protect homes and schools.

“If we get hundreds of people going and speaking for three minutes each, they are going to hear us, and it is going to make them delay this vote,” said Allen. “Please, I urge you to show up, take a stand, make a difference.”

Brentsville Supervisor Jeanine Lawson-R has said she would like to see the project delayed until such time a sound study is complete, and the noise ordinance has been strengthened, but the rest of the board will need to be convinced.

The greatest data center noise is generated from the HVAC systems, which run 24-7, and HVAC systems are exempt from the county’s antiquated noise ordinance.

“The county has not even done a noise study yet and they are already approving all these data centers. The time to investigate these issues is BEFORE the data centers are built NOT AFTER," said Allen. "We need the board of county supervisors to suspend all data center development until these issues have been addressed.”

He noted that Yondr’s website, which owns the data center surrounding Amberleigh, boasts: “You will never know what projects we’ve done or who we’ve done them for. Partner with us, and you can be sure our discreet approach won’t leave you exposed.”

“Understand that your county government is their partner in this deceit and feigns ignorance,” Wright said. “The average family member can’t possibly keep up with all the lousy ideas our board of county supervisors is throwing at us,” he said, noting the Planning Commission is set to vote on the Prince William Digital Gateway Wednesday evening, which is another project he opposes.

“This board is an autocratic regime actively working against your interests and citizens must rise up to bring it to heal.”

Wright urged citizens can sign the petition to recall Chair Ann Wheeler-D, due to her investments in Blackstone, the holding company that owns data center properties, and tech companies owning data centers in the county. He reminds Gainesville District residents to sign the petition to recall Gainesville Supervisor Pete Candland-R, who is selling his property along with his neighbors on Pageland Lane.

“I am Dr. John Lyver and yes, I am a retired NASA rocket scientist,” said Lyver explaining he is the engineering/data analysis person for the Prince William HOA Roundtable, which is a citizen group opposed to county data centers outside the overlay district.

“The county does not do a holistic type of analysis,” he said, not on the drinking water, wildlife, sewer, area of historic significance, nor on energy usage. ”Just how much electricity will all of these data centers require?”

According to his noise model, when the Yondr data centers are operational, noise levels will go up to 72-77 decibels in the two neighborhoods. That is the equivalent of having two vacuum cleaners running in one room. But, more data centers are slated to follow!

“Noise in the neighborhood will be nonstop...louder at night.” “Excessive noise will cause medical issues that are stress related.”

Children will sleep, learn and play to the noise, he explained. At Piney Branch Elementary School that noise could reach “over 80 decibels,” which is comparable to constantly hearing a blender.

Lyver said it will cost “tens of millions of dollars for each school,” to build noise barrier walls or retrofit them for managing high levels of noise. “And the school board is in favor of data centers right now!”

Town of Haymarket Councilman Bob Weir, gave an impromptu speech, explaining that when the data center overlay district was created in 2016 citizens worked with other stakeholders and convinced them to exclude the Hunter property. That property includes the area around Amberleigh and Devlin Road.

Weir claimed after Rebecca Horner took over as Prince William Deputy County Executive, and the new board came in, that property was once again considered. He said that some supervisors protected their communities while Bristow was not protected although, to him, other locations were more suitable.

“The planning department is not your friend,” he said.

He told residents never to assume that county planners and supervisors are looking out for them. Weir, who described himself as the county 'curmudgeon,' told residents they have to be their own advocates.

Most demonstrators were residents of Amberleigh Station and Silverleaf Estates. Others came from nearby communities in Bristow and Gainesville. A few people were from the Great Oak community. A few others from Heritage Hunt.

Linton Hall area residents said they are very concerned about the noise levels and their home values. They believe that if the supervisors reject Devlin Tech Park, they stand a chance to gain similar concessions around their communities. They hope it is not too late for their voices to be heard.