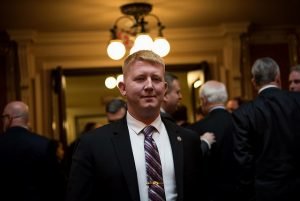 As the delegate from the 50th District, he represents residents of Bristow and the City of Manassas in the house of Delegates of the Virginia General Assembly. Carter is serving his first term in that office.

He will go on to be the Democrats candidate on Nov. 5, 2019 and face Republican candidate Ian Lovejoy.

In 2017, Carter won against long-serving Virginia delegate Jackson Miller (R-50th). Miller had served as the Majority Whip in the House of the Virginia General Assembly.

Carter has described himself as a Democratic Socialist in the style of Bernie Sanders.

The expansion of Medicaid has been his key issue.

Carter, largely a newcomer to politics, is an IT specialist who lives in the City of Manassas. Lee served five years of service in the United States Marine Corps. Before running for office, he worked as a community activist in Manassas, focusing on affordable housing and worker protection. He ran on a progressive platform and advocated for Virginia to adopt a single-payer health insurance model. A key issue to Carter’s campaign was Medicaid expansion.

Here is some campaign information on Lee Carter:

In addition to expanding Medicaid in Virginia; Carter supports: Carter ran for office after a work accident left him without compensation.