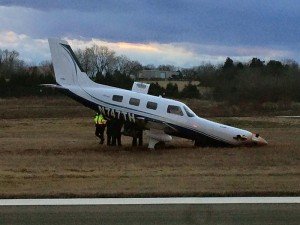 The Mansassas Volunteer Fire Company and other local units responded to the Manassas Regional Airport for a plane crash Thursday evening.

According to a department spokesperson, a single engine aircraft missed the runway.

Several reports indicate that the plane's nose gear may have malfunctioned.

"The pilot was the only person onboard the aircraft, but did not receive any injuries and refused treatment," they said.

Firefighters secured the aircraft's fuel and determined no hazards present.

State police have taken over the investigation of the incident.

Tonight members of MVFC along with other City Fire and Rescue units responded to the Manassas Regional Airport for a plane crash.