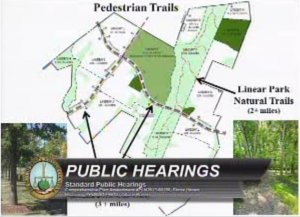 After a long public hearing Tuesday evening, the Prince William Board of County Supervisors unanimously approved the deferral of the vote on the Stone Haven community until the Brentsville Magisterial District has a seated supervisor. As a result, the public meeting will reopen and the vote has been rescheduled for the third meeting in January.

It was nearly midnight before the board made the decision to defer. While approximately 30 residents requested the vote be deferred, that was not the only reason the deferral was granted. Chairman Corey Stewart (R) said the board requires more information from the School Division about school populations and projection numbers for the 13th high school.

“Obviously, there are very strong feelings on both sides of this issue,” said Stewart. “For me, it comes down to the schools. We have to have some better data. We can’t look at the school system and say, ‘that is your problem.’ Ultimately it’s all of our problems. I think the appropriate thing would be to go ahead and defer this until we get a new Brentsville Supervisor.”

By Bristow Beat’s count, 65 Prince William residents spoke at the public hearing. With some speakers representing organization, neighbors or friends, it is impossible to accurately count all of the individuals being represented. However, just looking at individual speakers at the podium, it was very nearly evenly divided. Thirty-two Prince William residents spoke on behalf of Stone Haven, and 29 residents opposed it.

Of those who opposed the development, almost all requested that supervisors delay the vote until Brentsville had a newly elected representative on the board. Many called it, “taxation without representation,” to not grant that request.

When one looks strictly at Brentsville residents, the numbers say that more were opposed to Stone Haven. However, one man claimed to represent 100 plus residents of Amberleigh Station in favor of the proposed development.

Those in favor of the Stone Have praised the Hunter Trust for their generous proffers. They proffered more than what was required of them, even exceeding the new proffer amounts that have not officially taken effect yet. They include the proffering of an 85-acre high school site at an estimated value of $24 million, including road access.

According to attorney Pete Dolan, the applicant was proffering 498.4 acres to the county, or 35 percent of their total land. Additionally, the developer proffered to complete Rollins Ford Road and University Boulevard.

Dolan also said the Stone Haven community would yield 71 percent fewer cars on the road than what would result if the land-use designation is converted to all FEC as is the planned use.

Dolan said the development is also less dense than existing communities. However, this number is derived by adding together all residential area and open space and dividing by the number of homes. 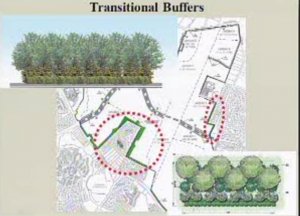 Reaching Out to the Community

Many in favor of the community liked that the applicant reached out to existing community members throughout the process. The applicant, in cooperation with Supervisor Wally Covington’s office, held meetings in which stakeholders helped the planning department design a map to reflect the needs and wants of the community.

That map resulted in open space, fields, a school site, buffers, trails, sidewalks and a commercial area near Wellington Road. Residents helped to situation homes near existing residential areas. Input from the community directly impacted the final map presented to the Planning Commission.

Steve Donahoe with the Prince William Planning Office told the supervisors he thought it is a good proposal.

Chris Price of the Planning Department said that while he understands that people are hesitant about developing a large swath of land at once, for the county, it is an ideal situation.

“It’s really shocking for people to see an 864 acre project; we don’t see many of them here as well…But, I will tell you; it does provide an opportunity to master plan, and to integrate uses, to provide connectivity and to ensure we are getting a really well scheduled and phased schedule of infrastructure. I think we would love to do projects like this in the future,” Price said.

The land for Stone Have is currently designated A1, agricultural, meaning it would only yield one home per every 10 acres.

However, it is surrounded to the north by a land use that allows for light industry. This opens the door for the applicant to request a similar land-use; however residents boarding the Stone Haven property strongly oppose an industrial designation.

The applicant is requesting that in order to build Stone Haven, the land-use is rezoned to SRL, Suburban Residential Low, FEC, Flexible Use Employment Center, and ER, Environmental Resource.

Should the BOCS approved Stone Haven in concordance with the land-use change, the county would benefit from the proffers the applicant has offered. However, should only the land-use designation be changed, staff said that the county could lose out on receiving any proffers. 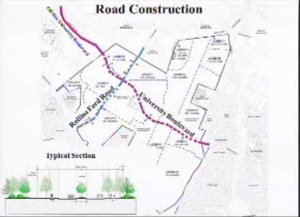 Many Brentsville residents had concerns about the overcrowding that new residents would bring. They claimed it would create a negative-tax burden, which board members said was true of past developments, but it is more difficult to quantify in 2014 with increased proffers.

And despite the building of new roads, residents were especially concerned about increased bottleneck traffic on I-66 in the morning and evening. One Gainesville woman said she had to leave a job in Chantilly because the traffic had gotten so bad in the morning.

While residents realized they would gain new sites for schools and fields, they asked if the benefit is worth the cost.

“What have we gained?” asked Patty McKay, referring to all the other times Prince William County had approved new development to obtain new schools and fields.

“If we are doing so well, why can’t we afford to buy our own schools and fields?” asked one long-time resident.

A few people said their home values still have not recovered from the bubble burst of 2008, and that they hoped that keeping inventory low would help their home prices to recover.

Noise levels near Jiffy Lube Live were also a concern.

In Favor of Stone Haven

The biggest argument in favor of Stone Haven was that development was inevitable, so Prince William County ought to except a generous proffer deal.

“We are a desirable place. I like the idea of Stone Haven. We are going to continue to grow. There is a demand. We need the schools. It will save a lot of money for the county,” said one woman.

“I know this is going to be developed eventually, and this looks pretty good,” said another woman.

Small business owners were in favor of new development, which they hoped would sustain their businesses.

“This plan has been picked apart more than any plan I have every heard of,” said one Brentsville small business owner.

One Prince William realtor said inventory is not meeting demand for homes, and that new homes would sell quickly.

Although it might sound contradictory to the school division’s usual stance of development, School Board Chairman Milt Johns explained that his board unanimously voted in favor of this new development.

Johns said a new high school is desperately needed in western Prince William County as of “yesterday.” Already Patriot and Battlefield are significantly over their capacity. By 2018, Stonewall Jackson will be significantly overcapacity as well.

Johns said PWCS does not have another site in mind, and if they do find another site, it will likely be in the Rural Crescent, not conveniently located within the community. He also said a big factor is the cost. Having a $24 million site proffered will save the School Division much needed money they could use elsewhere.

Johns said he agrees with Jeanine Lawson, Republican Candidate for Brentsville Supervisor, that development cannot solve all the problems, and he believes the county will eventually need to break its development cycle. However, he said in this instance, he believes it is paramount that PWCS gets that school site.

Later in the evening, Stewart asked the School Division for clarification on school projections. PWCS Planning Staff led by Dave Beavers that their 2018 projections factors in some of Stone Haven though not the totality of the development.

By 2018, Patriot, Battlefield and Stonewall Jackson high schools alone are predicted to yield 2,000 students that could immediately fill the high school. Thus, the school would be at or above capacity when it opens.

Stewart found this concerning and wanted to take more time to gather more data on projections for the 13th high school.