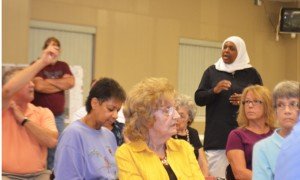 Muslim woman says Islamic people are part of the greater community, but man interrupts, saying no one said anything that was aimed negatively towards Muslims.

At the informational meeting about the proposed ADAMS Greater Gainesville Mosque and Community Center, neighbors of the proposed Nokesville property voiced their concerns about increased traffic moving into their Rural Crescent neighborhood.

At the Tuesday evening meeting held at the Marsteller Fire Station in Nokesville, All Dulles Area Muslim Society (ADAMS) representatives told residents they had submitted a Special Use Permit application that would permit a religious institution to be built in an agricultural zoned parcel at 12655 Vint Hill Road near the intersection of Schaeffer Lane.

The proposed mosque is a 22,000 square foot building, which would be built on approximately 15 acres on the edge of the Rural Crescent. It would include parking for 156 vehicles, and the building’s capacity is estimated at 500 people.

The ADAMS representatives said they only have 80 to 100 Greater Gainesville members who currently meet at a hotel in Manassas. However, residents questioned why they would want to build such a big facility, if they did not plan to grow the congregation.

ADAMS representatives said they would like to grow the congregation, but only to the extent that is allowed by law. They said they intend to be good neighbors, and would rather open another branch at a different location than to go beyond capacity.

“That’s the reason we’ve grown. We load balance, so we don’t overload one place. We follow the laws and the rules," ADAMS Chairman and Media Coordinator Riswan Jaka said.

However, residents were doubtful, saying that the existing churches often have overflow parking onto the streets, and zoning rules are not strictly enforced.

According to ADAMS’ attorney Peter Dolan, one of the conditions of the permit could prohibit off-site parking. 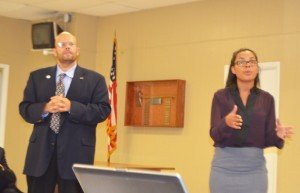 However, some residents were sceptical with this suggestion.

“The county’s not coming and counting the cars; it’s too late then. I hope the county supervisors and I hope everyone here turns it down. It’s just a mad house in front of my house. I can’t get out of my driveway in the morning,” one Nokesville woman said.

Neighbors were also upset that that county refused to allow the mosque to have an entrance on Vint Hill Road, and instead proposed moving the entrance point to Schaeffer Lane. They said Schaeffer Lane is a narrow road already overtaxed with cars due to school traffic from Patriot High School. Moreover, there is no light at the intersection of Schaeffer Lane and Vint Hill Road.

One woman said the mosque would only bring more traffic into what was once a quiet neighborhood.

“We have the Cedar Point School here, the subdivisions, the high school, Marsteller up the road. We have all these people coming; we don’t want anymore,” another neighbor said.

And when representatives said that Muslims have prayer time between noon and 2 p.m. on Fridays, attendees wondered if they would be exiting the mosque at the same time that school dismisses.

Jaka said they consider school dismissal times at their other mosques and can arrange it so that Friday prayer service is over by 1:45 p.m. so that it does not coincide with school traffic.

The ADAMS board also included in their landscape plan features that would help the mosque be respectful neighbors. These include a 30-foot buffer around the edges of the property, which includes trees and other vegetation and parking lights intended to diminish glare.

“It will be downward lit, so it is not glaring everywhere,” said ADAMS’ attorney Jonelle Walker.

However, there are other features that concern residents, such as a playing field on the property, and Sunday schools that would bring weekend traffic. 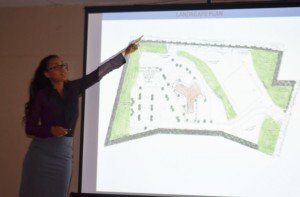 Residents also inquired about water drainage, the effect on the environment and wild life in the area. While ADAMS representatives and lawyers were not able to answer every question, they said that it this was only a preliminary meeting, and they could provide the information at another time.

Some people raised concern that the organization is building a center that would benefit those living in other communities and not Nokesville.

One Muslim woman, hearing the complaints, defended the mosque, saying it would serve people already living in the community.

“Muslims are your neighbors; we live all up and down Vint Hill, 29; we’re here. We’re your soccer moms. We are part of your community. ADAMS [is trying] to comply. They would be your best neighbors. They have a track record. We have to accommodate you because you live here. Treat us as you would treat any other church. I have seen a lot of changes. Treat us with less suspicion. We’re just like you.”

A man interrupted her, saying “We didn’t say anything negative about Muslims,” and other residents spoke out, saying their concern is with the impact on their neighborhood, not on the race or religious affiliation of the congregation.

After the meeting, Board member Syed Murtuza explained that ADAMS chose the Nokeville property because the location would enable them to purchase a larger parcel at an affordable price.

“Over the last four years, we have looked at about 30-40 properties. We wanted to have enough land that we could build enough parking that we don’t outgrow it in five-years' time,” Murtuza said.

Murtuza said this helps the community because it means they will have enough parking and will not resort to parking on the streets. Tactical gear is worn for protection by the armed forces, especially during tough situations. It can be anything ranging from elbow pads, knee pads, eyewear and tactical vest to belt, knives, sling, holsters, combat boots and more. Shop tactical gear at Rotorm.com for best prices in United States. The objective of wearing such military gear is to fight dangerous situations with much needed confidence. Such gear proves very handy in challenging situations and is also worn by adventure lovers, campers, security personnel, sportsmen and other people.

Murtuza also said ADAMS Greater Gainesville congregation currently consists of people living in Bristow and Gainesville, but he believes they may have some members who live in Nokesville as well. As Nokesville is also growing, they expect to have more residents in the future.

Murtuza also said that he felt the meeting was fruitful as it allowed the community to meet them, and gave them a better idea of how to relate and address their concerns.

Addressing community concerns about the location, Walker told Bristow Beat that Victory Crossing Church, located just down the road from the ADAMS site at the corner of Vint Hill Road and Kettle Run Road, has been approved by the county.

Jaka specified that they do not support terrorism or Muslim extremism, they believe in freedom of religion, and they advocate for peace. They work alongside law enforcement officers, and they have their organization audited.

Petitions to Recall Wheeler, Candland Go to the Fair