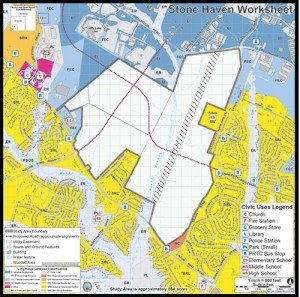 From 2010 to 2013, RK Realty donated $11,000 to the Stewart for Prince William County campaign, $5,000 to Covington’s Brentsville campaign and $2,500 to Peter Candland’s Gainesville campaign as is documented by vpap.org.

During that time, EV Hunter Trust was seeking to build the Bristow community under the old name, “Brentwood.”

RK Realty donated to other politicians in and around Prince William County as well. All of them were Republicans. EV Hunter Trust donated to both Republicans and Democrats.

While accepting campaign donations from developers is in no way illegal, Ralph Stephenson of Prince William Citizens for Balanced Growth believes those supervisors have compromised their votes on the Stone Haven development and should recuse themselves from voting.

Stephenson and his organization oppose the development that would occupy 864.2 acres and introduce 1,650 new homes into the area. He believes the development will lead to much worse overcrowding in Prince William public school, traffic congestion, high population density, the loss of green space and the loss of more land that could be used to attract high-paying jobs to the area.

He also believes taxpayers will pay the burden of county services for new residents moving into the community.

Gainesville Supervisor Pete Candland told Bristow Beat that he will not be swayed by his campaign contributors.

“Absolutely not. I vote on the merits of te project and if it is going to be a benefit to the people of Prince William county, and that is how I handle all my decisions," Candland said. "I let people know that I vote the way that I feel is best for the county. I don’t feel beholden to anyone."

For instance, Candland said he had some contributors who were big supporters of the Bi-County Parkway, but he still continues to oppose that project.

Candland said he has several misgivings about the Stone Haven project. Specifically, he worries that he it could be a tax drain on citizens. He said while it is nice that they are offering land proffers, such as a school site, it will not do anything to mitigate the effect on students who will be entering the school system as soon as the first homes are built. He also believes the area is becoming too overcrowded, which is especially affecting commute times on I-66.

Last week, Brentsville Supervisor Covington said that he was not yet decided on the Stone Haven project, although he did like some of the proffers that were being included in the plan.

Stone Haven would also include a commercial and retail center in addition to single family and townhomes. In total, the trust proffered $20 million beyond what will be required by the new 2014 proffers that have not taken affect yet.

Some residents feel those generous proffers are enough to make the development worthwhile while others think it will just serve to continue the trend of more citizens entering into the area, leaving Prince William County to play catch up. Some residents of North Bristow also think it is preferable to have residential neighbors than to have industrial development move in near their existing communities.

However, Stephenson reminds residents that Stone Haven is not the only new residential development in the pipeline. Prince William Station is another large development proposed for the Manassas-Brentsville region.

Stephenson is encouraging those who oppose the Stone Haven development to take a more active role in preventing it from receiving Board approval. He suggests residents write their local supervisors; plan on attending the public hearing at the BOCS (the date of which has yet to be announced); spread the word via word-of-mouth and blogs, and even go door-to-door handing out flyers and informing their neighbors about the development.

“In democracies, the people tend to get the kind of government they have earned and deserve. If citizens don't become informed, don't vote, don't take the time to get involved, they'll have a government that is run entirely by elites who typically won't care much about the people's interests, just their own. Nowhere is this more true than at the local level, where there's no one looking out for your welfare, but you,” Stephenson wrote in a letter to the editor.