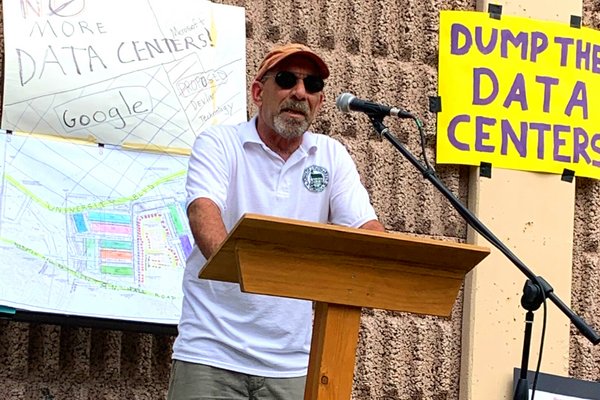 Long-serving Haymarket Council member and outspoken advocate for transparency Bob Weir won the Republican nomination for the Gainesville seat on the Prince William County Board of Supervisors. He was elected at a party mass meeting, Jan. 2, at Park Valley Church in Greater Haymarket.

The Special Election for Gainesville Supervisor is scheduled to be held on Feb. 21, 2023. Weir will face off against Democrat Kerensa Sumer of Manassas.

The special election is a result of Gainesville Supervisor Pete Candland stepping down from office on Dec. 16, due to a conflict of interest. Many criticized Candland for not stepping down sooner before the supervisors voted on amendments to its Comprehensive Plan and adding the Prince William Digital Gateway to that plan.

"I have the experience and expertise to hit the ground running and immediately address the concerns of residents who have been marginalized and ignored, restoring integrity and trust, qualities long,” Weir said.

Weir is known for taking on the Prince William County government and demanding transparency. He opposed the building of data centers along Pageland Lane and criticized how it was approved - not only because the Gainesville District received no representation- but also the secrecy of the projects and how staff, supervisors and their appointed representatives conducted their meetings.

Weir made no secret that he is unhappy with the board (he’s also been critical of previous boards), and tells people to be extra vigilant in order to hold their local elected leaders in check.

At an October rally to keep data centers out of Bristow, Weir told the people the supervisors are not their friends and do not have their best interests in mind. He pointed out how they are willing to place data centers so close to homes and schools without explaining to residents the extent of the impact on them.

He informed residents that the Data Center Overlay District was developed with input from county residents, but the current board chose to override it. Weir maintained there is land available within the overlay district, according to the county's own records, unless future development plans are being hidden from the residents.

Weir hopes to change the direction in which the county is headed and curb residential development that is not well planned. Weir is suspicious of suburban sprawl when the county has not outlined to fund needed infrastructures such as sewer, water, roads, and schools.
While many supervisors say it is a plan to create additional housing to meet future needs, Weir described it as "unfettered development" that would create an "increased tax burden without corresponding public service improvements."

Weir also has a history of calling out politicians regardless of their political affiliations but has described the current board as especially divisive, and unsupportive of Gainesville residents.

"The residents of the county have grown weary of divisive tactics that ignore their interests. I am committed to returning a voice to the residents, championing fiscal responsibility, and maintaining my tradition of open-door service and leadership.”

Weir counts among his accomplishments that also fought shoulder to shoulder with Gainesville residents against the Haymarket transmission lines, and this resulted in Dominion Power ultimately burying the lines.
Weir served on various local councils, committees, and organizations.

Bob is a nearly lifelong resident of Virginia, the child of a career Army Officer and State Department employee. After graduating from the University of Virginia and starting a family, Bob chose to move his family to the Gainesville District in 2000, largely as a result of the quality of life and educational opportunities presented by Prince William County.
As a member of the Haymarket Town Council and several civic organizations, Bob has consistently fought for the interests of the County’s residents and engineered many victories for those residents, including the undergrounding of the Haymarket Transmission Line.
Bob and his wife Diane have been married for 31 years, reside in the Town of Haymarket and have put three children through Prince William County schools.

This article is protected by Copyright law and is illegal to copy and/or disseminate it without permission whether via email, social media, a repost on a website or in print. Copying the article is not protected simply by providing the author's name and a link back to BristowBeat.com and/or the article. Bristow Beat encourages readers to share our articles by providing a short excerpt (no more than one paragraph) or summary of the article, and including a link directly back to the article being shared.  Sharing our articles in the appropriate and legal manner supports Bristow Beat and our local sponsors.