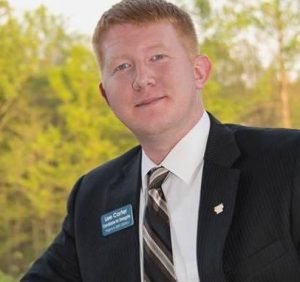 Lee Carter, Democratic Candidate for Delegate of Virginia's 50th District.
Lee Carter, Democratic Candidate for Virginia State Delegate of the 50th District [Bristow, Manassas City], declared his intent to change Virginia healthcare coverage towards a single-payer system at press conference in Richmond, Monday. Carter, who is running against incumbent Jackson Miller (R), was joined by six other Democratic candidates and supported by ten more to announced their vision for the future of healthcare in Virginia in a press conference held at 2 p.m., Oct. 2, at Kanawha Plaza. The proposal is historic. If implemented, Virginia would be the first state to take offer universal healthcare to its citizens. Carter believes healthcare coverage for all is a priority because approximately 750,000 Virginia residents currently live without it. Even if the Commonwealth were to expand Medicaid that would only cover approximately 400,000 more residents, living 350,000 uncovered. He looks at that as a system that is still not working for a great number of people. Expanding Medicaid “a necessary first step,” he said in a phone interview with Bristow Beat, Monday following the press conference, but “that can’t be the be all end all; we have to keep going” Carter is a strong believer in a single-payer system, by which the state or federal government provides healthcare coverage for all citizens, regardless of income, job status or buying into a privatized or public healthcare plan. Though it has not been done in the U.S. It is successful in several European nations, many similar in population and GDP as Virginia. States need to provide the Affordable Care Act as a minimum, but after that, they have the freedom to offer more. Carter, who served in the U.S. Marine Corps, explained the civilian system is severely lacking compared to the comprehensive healthcare coverage an active duty military member receives. “[As a military member] you go to medical and you show your ID card. There are no out of pocket costs. The primary focus is on getting better,” Carter said. Civilians may need to fight with insurance companies and make sure their provider is in network in order to get seen by a doctor- all while they may be suffering from serious health impairments. There is also the monetary incentive for the change. “Simplifying the system will not only make things better for the individual, it will also make it cheaper,” said Carter, because profits will be eliminated. To Carter it is a moral imperative, because people die without healthcare and fall far into debt. He also said the new system would help employers. “Small businesses in particular spend a lot of time, effort and money to shop around for health care plans for their employees. It is a tremendous burden for a lot of employers that won’t be necessary,” Carter said, adding it would be “great all around for the economy.” To him, a single-payer common sense, and he blames a large influx of corporate money for the reason it has not been implemented sooner. He is proud that he has helped get approximately 1/3 of Democratic challengers on board to champion the issue. He acknowledges it will be an uphill battle, but one he feels is worth fighting. “I think particularly within the 50th district, people hungry for a change – for somebody who is willing to take a stand,” Carter said. “I will fight to implement the policies that I believe in because they will make your life better.” Other supporters include the following candidates:   *Correction: Elizabeth Guzman said she is not supporting the single-payer system, and the addition of her name was a staff error.